I received a copy of Jacob Appel’s The Liars’ Asylum for review purposes. As always, this review reflects only my honest opinions on the book.

About The Liars’ Asylum 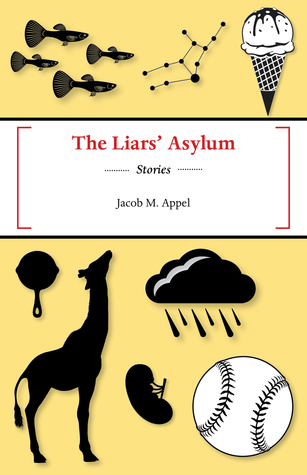 The frustrations of romantic love in its various guises—a domineering kindergarten teacher for a dashing artificial foliage designer, a suicidal physicist for his star student, a dialysis patient at a sleep-away camp for the camp owner’s daughter—provide the common theme for the stories in Jacob M. Appel’s seventh collection. We meet a psychiatrist dabbling with infidelity during a crisis in which rain turns into truth serum, a Finnish-American soldier charged with facilitating his commanding officer’s extra-marital affair, and a couple transporting a wealthy, “locked-in” patient across the Piedmont to his new nursing home. Appel’s literary short fiction offers a quirky window into the pangs and promise of love.

I’ve recently returned to the fiction in my own writing, so the timing couldn’t be better for me to pick up Jacob Appel’s The Liars’ Asylum.  I wasn’t familiar with Jacob until he reached out about this review, but the reviews of his work were absolutely glowing. I had no doubt I was in for a treat with this short story collection.

And a treat it was!  From a technical standpoint, the writing itself is absolutely beautiful.  For the first time since leaving school, I found myself grabbing a pencil to underline some of my favourite lines.  A personal favourite?

“Maybe that’s what love is, really—wishing for a boy without kidneys to become an All-State shortstop, a Major Leaguer, a household name, while knowing that each of these successes will carry him further into the stratospheric distance, further beyond one’s own mere mortal reach.” —When Love Was an Angel’s Kidney

The whole collection was enjoyable, but, if I had to choose, my favourite stories were “Prisoners of the Multiverse” and the titlular “The Liars’ Asylum.” Rebecca and Ian stayed with me long after I finished the book. When I looked up at the sky at night, I thought of Vance scribbling out a star chart; when it rained, a small part of me wondered if there would suddenly be mass hysteria of truth-telling.

Jacob Appel may have been a new author to me, but I’m sure his work won’t be a one-time read. I very well may reread The Liars’ Asylum until I can pick up my next of his titles!

Jacob M. Appel’s first novel, The Man Who Wouldn’t Stand Up, won the Dundee International Book Award in 2012. His short story collection, Scouting for the Reaper, won the 2012 Hudson Prize. He has published short fiction in more than two hundred literary journals including Agni, Conjunctions, Gettysburg Review, Southwest Review, Virginia Quarterly Review, and West Branch. His work has been short listed for the O. Henry Award (2001), Best American Short Stories (2007, 2008), Best American Essays (2011, 2012), and received “special mention” for the Pushcart Prize in 2006, 2007, 2011 and 2013.