I received a copy of Vanessa Maki’s social media isn’t what’s killed me for review purposes. As always, this review reflects only my honest thoughts on the book. 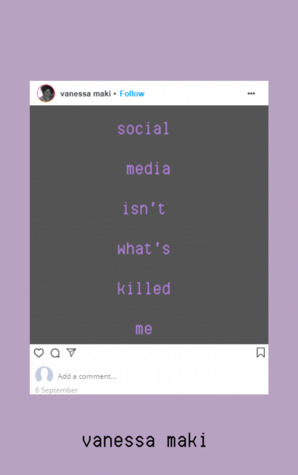 I’ve followed Vanessa on Twitter for a while now and have really liked the snippets of her work I’ve seen.  I was fortunate enough to have a photo, Rose Quartz & Rosemary, appear recently in rose quartz magazine, of which she’s the EIC.  But social media isn’t what killed me was my first real taste of her work.  Suffice it to say, it’s certainly solidified my place as a fan!

The unique formatting of this book was the first thing to catch my eye.  The vibrant cover hints at what’s to come, but I didn’t initially realise that the pieces inside are just as wonderfully experimental. Each page is set up like the cover, with a social media-style post showcasing each poem.

In a world where you can hop on a social media platform and find some sort of poetry, this chapbook remains refreshing.  Even in its digital form, it unites social media and more traditional platforms in an engaging way.

Like any good visual poems, these pieces give the reader a lot to think about, even beyond the words (which are wonderful in and of themselves). How many likes did this post/poem receive?  Are there any comments?  The irresistible urge to read the comments section and engage with online posts is as prevalent in this book as in scrolling through Twitter.  The pieces, for the most part, include a blank space prompting you to “add a comment” and it’s hard to resist.

Perhaps because I’m a writer myself, I couldn’t help thinking about Maki’s writing and compilation process.  Did she originally post the pieces to her own social media pages? Or are these interactions themselves a part of the writing process?  How did she determine what platform would be used for each? Whatever the case, there’s a sort of genuine quality to these details that I absolutely loved.  This book draws readers in and I can’t help but wonder: what does that say about social media itself?

And, of course, the most important part of any collection: the poems themselves. Skimming through the book a third time, I think “6 facts,” “the bed we made,” and “i want to forget” may be my favourites.  These poems delve into relationships, mental health, and more, giving the reader insight into the speaker–one who’s intrinsically tied with the author as they note who’s made each post.

As a whole, I really enjoyed this chapbook and I think it’s certainly one I’ll return to.

Vanessa Maki is a writer & artist who dabbles in many literary genres & art forms. She’s from a small city in BC, Canada that she finds is irrelevant.  She loves experimental work & topics she often explores are blackness, queer identity, mental health issues & relationships.  Outside of that she enjoys writing/creating work about TV, film, music, & political topics.  She is EIC of rose quartz magazine (formerly rose quartz journal which was founded in May 2018) which is a literary/arts magazine for queer women (or womxn) and is a columnist for TERSE journal + Pussy Magic.