I received a copy of T.J. London’s  The Tory through Historical Fiction Virtual Book Tours for review purposes. As always, this review reflects only my honest opinions on the book.

This post originally appeared on For the Sake of Good Taste.

If you haven’t already (or need a refresher), be sure to check out my spotlight post for this book.  Though the tour has officially ended, I’ll link to the bloggers who participated below so you can check out their posts, too! 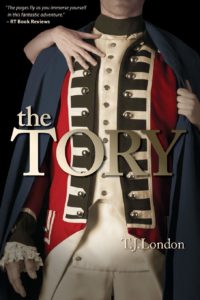 It is the winter of 1776, and Captain John Carlisle, one of His Majesty’s not-so-finest, has gone back to the scene of the crime to right a wrong so dark it left a permanent stain on what was once an illustrious career and left a man broken, defeated, in search of justice…

In an effort to win back his commission, he must discover the true nature of the relationship between the Six Nations of the Iroquois and the Colonial Army. Undercover as a war profiteer, John travels to the treacherous Mohawk River Valley and infiltrates local society, making friends with those he’s come to betray.

But a chance meeting with a beautiful half Oneida innkeeper, whose tragic history is integrally linked to his own, will provide him with the intelligence he needs to complete his mission—and devastate her people.

Now, as the flames of war threaten to consume the Mohawk Valley, John has the chance to not only serve King and country but to clear his name. When the truth he uncovers ties his own secrets to those in the highest positions of the British military and threatens the very life of the woman he’s come to love, he will be forced to make a choice…

Not only was a T.J. London an entirely new-to-me author when I received copies of The Tory and The Traitor, but the period was also relatively novel.  Despite my trio of history minors, my knowledge of the American Revolution is essentially the half a dozen songs I know from Hamilton.

That being said, I have been trying to branch out a bit in my reading and this was a great start, to be soon followed by its sequel.  Reading this book, it was clear that London has done her research and I had no doubt that I was reading something that, albeit fiction, was accurate where it needed to be.    The succinct foreword further proved my point–this author clearly loves the era in question and knows what she is talking about, fictionalised or not.

On a similar note, the author herself has a unique voice that is clear in both the novel and her writings about it.  The acknowledgements, in particular, come to mind;  her mention of her chronic migraines and gratitude towards her doctor in the process of dealing with them while writing was both relatable and memorable.  Personally, I find little details like this to be a huge factor when choosing authors to read.

Back to the topic of The Tory, I struggled at first to sympathise with the protagonist, John.  After all, he is tremendously flawed–he is, as he calls himself time again, a scoundrel.  I met his character with the same trepidation as Dellis, the book’s female lead.  Yet, by the book’s end, I found myself rooting for him and for his chances to further explore his feelings for Dellis.

One of my favourite aspects of this novel was, in fact, Dellis McKesson.  She, too, is flawed, but she tries to do what is right for herself and for her people, as well as for her parents’ memories.  What most strikes me, though, is her strength.  Though John does help her to work past her fears, this is not a story of the brave soldier swooping in to save the damsel in distress.  His efforts are simply additions to her own.

The Oneida and their importance to the novel did take some getting used to at first, especially as its been many years since I read much featuring indigenous people.  However, once I caught on to the basics, and to the McKesson family’s connections, this became one of my favourite elements.

It’s important to note that there are some rather graphic scenes in this book, which did come as a surprise.  In addition to sexual content, there is some terrifying violence, specifically on the part of a particularly sadistic antagonist.

Overall, though, I did enjoy reading The Tory.  It’s rather lengthy, but this allows for plenty of plot and character development, which adds so much to the novel as a whole.  I’m looking forward to exploring what happens next in The Traitor!

T.J. London is a rebel, liberal, lover, fighter, diehard punk, and pharmacist-turned-author who loves history. As an author her goal is to fill in the gaps, writing stories about missing history, those little places that are so interesting yet sadly forgotten. Her favorite time periods to write in are first and foremost the American Revolutionary War, the French Revolution, the French and Indian War, the Russian Revolution and the Victorian Era. Her passions are traveling, writing, reading, barre, and sharing a glass of wine with her friends, while she collects experiences in this drama called life. She is a native of Metropolitan Detroit (but secretly dreams of being a Londoner) and resides there with her husband Fred and her beloved cat and writing partner Mickey.

Monday, November 5
Interview at Passages to the Past

Tuesday, November 6
Review at For the Sake of Good Taste (The Tory)

Tuesday, November 13
Review at Jorie Loves a Story (The Tory)
Review at For the Sake of Good Taste (The Traitor)