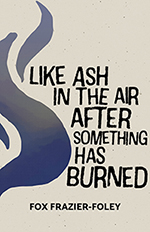 I recently sat down to re-read Fox Henry Frazier’s Like Ash in the Air After Something Has Burned, published by Hyacinth Girl Press in 2017. I first read this chapbook just about a year ago—as COVID-19 hit its stride in the United States (the first of several such surges), a few indie publishers aimed to make quarantine a little easier by sending out some complimentary books. Margaret, the Editor & Founder of Hyacinth Girl Press, was kind enough to send me this chapbook—not for reviewing purposes, but simply as a lovely act of kindness.

Still I enjoyed Like Ash in the Air After Something Has Burned enough to add it to my review queue anyway. Once 2020 finally came to a close and I got back to working on Pencils & Pages (and after another hiatus to deal with some health crises), I knew it was time for a re-read, and to get this review written.

First and foremost, I have to note this book’s beautiful design. With it’s ribbon binding and floral imagery, this is one of those books that you simply have to hold in your hands. I love the convenience, portability, and (in some cases) accessibility of ebooks, but I’m grateful this one is in print. Granted, I typically prefer print copies as a rule. But, in this case, this book is just too beautiful to not have in paper form. I’m not sure I can do it justice in words, writer or not—you’ll just have to order a copy and experience its beauty for yourself!

But beauty isn’t enough to make a book worth reading, of course, or they wouldn’t instill “don’t judge a book by its cover” into anyone who’ll listen. Fortunately, Like Ash in the Air After Something Has Burned has more than enough to offer in terms of text, too.

Anyone who’s read Boleyn can probably guess that historical poetry has a special place in my heart, especially when it comes with a feminist lens. Through narratives of sainted women, in all their daring, independence, and overthrowing of social norms, the poems in this collection provide just that.

Many of these poems focus on fragments, a stark contrast to their lengthy titles. But, much like with blackout poetry, this is an effective strategy. Each poem—each story—draws you in with its tale, and piecing together each individual shard ensures you’re even more engrossed. I’d argue that the poems almost turn into spells as they capture the reader, despite sainthood.

I could say far more about this enchanting chapbook but, really, it will do a much better job of that itself. As my first introduction to Fox Henry Frazier’s poetry, Like Ash in the Air After Something Has Burned has unquestionably made me a fan—and Hyacinth Girl Press has certainly made its mark on my “dream press” wish list!

Fox Henry Frazier is the author of two prize-winning collections of poetry: The Hydromantic Histories (Bright Hill Press, 2015), which was selected by Vermont Poet Laureate Chard deNiord as the recipient of the Bright Hill Press Poetry Award, and Exodus in X Minor (Sundress Publications, 2014). Her most recent collection, Like Ash in the Air After Something Has Burned (Hyacinth Girl Press, 2017), was recently nominated for an Elgin Award. Her non-fiction work has appeared in journals and magazines such as Denver Quarterly, Tarpaulin Sky, VIDA: Women in the Literary Arts, and elsewhere. Fox edited the anthologies Political Punch: Contemporary Poems on the Politics of Identity (Sundress Publications, 2016) and Among Margins: Critical and Lyrical Writing on Aesthetics (Ricochet Editions, 2016). She created and manages the micro-press Agape Editions (http://agapeeditions.com). Fox was graduated Phi Beta Kappa from Binghamton University, was honored with merit-based fellowships at Columbia University, where she earned an MFA, and was a Provost’s Fellow at the University of Southern California, where she earned a PhD in Literature and Creative Writing.